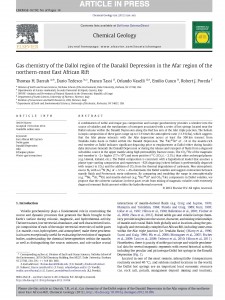 A combination of noble and major gas composition and isotope geochemistry provides a window into the source of volatiles and the mechanisms of transport associated with a series of hot springs located near the Dallol volcano within the Danakil Depression along the Red Sea arm of the Afar triple junction. The helium isotopic composition of these gases range up to 11.9 times the atmospheric ratio (11.9 R/Ra), which suggests that the Afar plume interacts with the Afar depression across at least the 300 km transect from Tendaho-Gabo basin to Dallol within the Danakil Depression. The 4He/40Ar* of ~14 in the mantle-rich end-member at Dallol indicates significant degassing prior to emplacement at Dallol either during basaltic dyke intrusions beneath the Danakil Depression or during the release and transport of fluids from a degassed subsolidus source in the upper mantle along high permeability fracture zones. The CO2/3He of the magmatic end-member is ~2× higher (7.7×109) and more positive δ13C (CO2) (−2.1‰) than other archetypal plumes (e.g. Hawaii, Iceland, etc.). The Dallol composition is consistent with a hypothetical model that assumes a plume-type starting composition and experiences ~92% degassing (where helium is preferentially degassed with respect to CO2) and the addition of CO2 from the thermal degradation of carbonate. Non-atmospheric excess N2 with a δ15N (N2) of +3.5 to +4‰ dominates the Dallol volatiles and suggests interaction between mantle fluids and Proterozoic meta-sediments. By comparing and modeling the range in atmospherically (e.g. 20Ne, 36Ar, 84Kr) and mantle-derived (e.g. 4He/40Ar* and CO2/3He) components in Dallol volatiles, we propose that the coherent variations in these gases result from mixing of magmatic volatiles with extremely degassed remnant fluids present within the hydrothermal reservoir.