A GIANT underground reservoir of molten rock has been discovered under the deserts of Ethiopia by British geologists.

They targeted the Afar region in the Horn of Africa after a recent surge in volcanic activity and earthquakes plus the appearance of giant cracks in the rocky surface. Tectonic plates in the area are pulling apart and gradually creating a new ocean, The (London) Sunday Times said.Now, the scientists have mapped the colossal underground lake of magma that lies up to 32km below the earth’s surface.

“We estimate that there is 3000 cubic kilometres of molten rock under Afar – enough to cover all of London … with around a kilometre of rock,” said Kathy Whaler, professor of geophysics at Edinburgh University.

The reservoir is under such pressure that it has forced tongues of molten rock up towards the surface, producing eruptions and earthquakes.

Afar lies in east Africa’s Great Rift Valley at a point where three tectonic plates are pulling apart from each other. Such movement creates gaps, or rifts, in the Earth’s crust, which allows molten rock to well up from deep below.

There are thousands of kilometres of these rifts around the world but almost all lie deep below the ocean. East Africa and Iceland are the only places where they emerge on to land.

Much of Afar is already below sea level but is protected from flooding by a barrier of low hills in Eritrea. Geologists believe the protective barrier will be overcome in about one million years, allowing the Red Sea to inundate the whole area.

Professor Whaler, who presented her preliminary results to the UK’s Royal Society last week, said, “Over geological time parts of southern Ethiopia and Somalia will split off and form a new island that moves out into the Indian Ocean.” 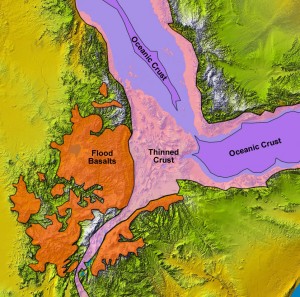